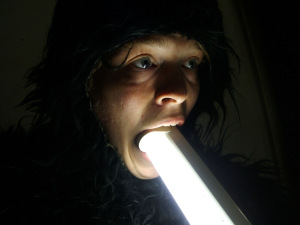 Our other major premiere at Darmstadt was a Staubach Honoraria commission from German composer Niklas Seidl. Completely unknown in the UK, he works in Cologne as a composer, cellist and ensemble leader. His work is interdisciplinary, provocative and witty, and his piece for us, Animal Testing, saw five singers lined up at desks, each with a laptop, tape recorder or megaphone, frantically following commands fed to them through earpieces. It was quite disturbing, a bit mystifying and funny – all intentional. We hope to bring this piece to the UK in 2013. 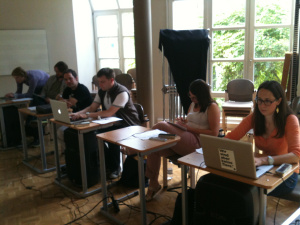 I caught up with Niklas in September to ask him more about his work.

Your Staubach Honoraria commission for us this year, ‘Animal Testing’, was quite intriguing: can you describe the piece and the ideas behind it?

When Thomas Schäfer from the IMD asked me, if I could imagine to write for singers, I spontaneously said, I’d rather not to. Just because it is very difficult to write for singers and I think there are only a few good solutions from contemporary composers dealing with the classical beauty and sonority of a voice, that also has much more connotation to semantics and concreteness than instruments do. Especially for me, who is, at the moment, very interested in microtonal melodies and chords. I found it hard to project that on singers (who definitely can sing microtonal, but it always has the aura of a chromatic, in other words “round” sound) and would not want to try out special noises with the singers. All these reason gave me the reason to say: yes, I want to write a piece for singers, this will be a challenge. I know, that these kinds of challenges can be very childish and boring (as with composers who write for piano, only using the keys. that is more a kind of a sport for musicologists and “Tonsetzer”), but I had something in mind, that could work.

I decided to do samples of the singers and used them in a program, where they would produce their samples on a laptop-keyboard, playing these samples in different microtonal ways. this way, I had a prefixed instrument (like a piano) as well as the human aura (especially in the lowest and highest register, one could hear the characteristics of the individual singers very well.

Three of the five performers had these laptops, one used an old cassette-recorder to record himself and playback the material, the other one had a megaphone.

All of the singers had headphones, which would tell them via auditive commands, what to do. They either had to speak texts simultaneously, produce sounds from the sampler (specified by key) or do continuous hitting-movements with the finger or fist on several surfaces. They only had a score written on paper for the last 40 seconds of the 12-minute piece.

With this setup, the singers seemed like a medium, reproducing several kinds of secrets, that only they would hear on the headphones. Also in a classical sense a musician is a medium (either of a written score or his own feelings, for example in improvisations) and in this piece I exaggerated the idea of reproduction to different levels: the pre-produced medium of the sampled voice, the human being itself and the additional machines like cassette-player and megaphone. 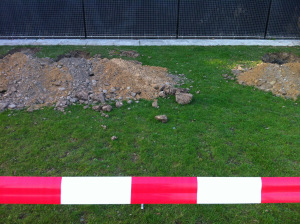 Your pieces often seem to enjoy using short, disconnected sounds of quite different (and quite surprising) types, put together into unexpected juxtapositions. Can you say something about your main compositional interests and aesthetic?

I hope that I do have different ideas and interests in my pieces, but there definitely is a main importance, which can be characterised by unexpected juxtapositions. I am interested in musical history and material as well as in the troubles of daily life, which could lead to a music like John Cage made. but I am more interested in really composing these different ideas very precisely to discover the beauty of different levels of quality. As an image, one could imagine for example a nice candlelit dinner-table with exotic fruits on it, then some toothless people in sports dress sitting on the table, listening to jazz music, played on a toy piano and watching a horror movie on TV. But all these details (just to mention a few of such a nice image) are not randomly set, but a precisely chosen juxtaposition, thus also connection.

Pierre Bourdieu in his concepts of habitus and field states, that there are different types of capitals (social, financial and cultural capital) which overlap and change all the time, so that one cannot divide society into classes but rather into a field, where individuals can be on top and the bottom at the same time and their position changes all the time. I often try to use this concept as the theoretical basis for my compositions. nevertheless, in the end it is only a piece of music and these ideas do not have to be as concrete as in Animal Testing all the time. 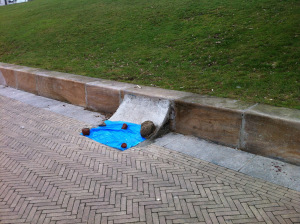 If we search for your music online we come across a series of Hoerspiele on mySpace. Is that an important strand of your work?

I started doing Hoerspiele already at the age of 16 and it was my path into composition. I am still interested in the concreteness that radio plays can produce, but am more focused on instrumental composition at the moment. For the internet it is much more fitting to present electronically produced formats than recordings of live performances. That is why in the internet I have a different style than in the concert-hall. 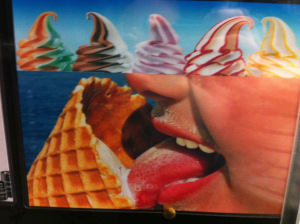 Your piece talgwaren & Absterben. variations sur le nom Moritz-Willy, for three melodicas and slide projection, uses everyday advertising signage and the very ‘unbeautiful’ sounds of the melodica: what were the ideas behind this work?

I always wanted to do a piece with all the absurdities of daily life, that I love to take pictures of. The habitus of the melodica is very similar to these pictures: it is a common version of the much more refined accordion. in the 20s and especially in the 50s, people would meet to play folk music or hits from the radio in melodica-orchestras. The people did not need to practise much, the instrument is very easy to play and in a group, the harmonies work very well. but all these instruments were never tuned very well, so that although the instrument is fix in tuning, the intonation was quite microtonal.

I opened up the instruments and retuned them to some weird tuning (something close to quartertones) to exaggerate this idea of slight misuse (as the language on the adverstising signages is as well. There are always misprints and wrongly used “”-signs etc.) 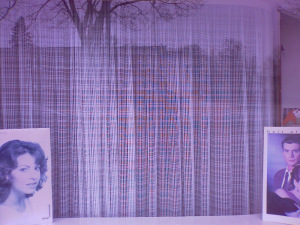 What is EL ALFONSO ENTRETENIMIENTO?

Together with Paul Hübner I work on the ENTERTAINMENT-cycle since three years. We create works, starting with a name (in this case ALFONSO) and a concrete person behind it (King Alfonso of Spain) and start associating in every direction. These works are generally humorous but also criticizing certain cultural forms (in the case of ALFONSO the German tourists on the Spanish coast, and King Alfonso’s fondness for pornographic movies). we mainly use film and music as media, but also have installative objects sometimes.

The names are based on a piece by Hannes Seidl: the art of entertainment. And we started to play with the name.

Our works are so far:

The Adolf entertainment (about Austrians, Masses and a general Angst towards the unknown)

THE ARNOLD ENTERTAINMENT (about Arnold Schönberg)

EL ALFONSO ENTRETENIMIENTO (about King Alfonso and tourists in Spain)

THE CLOTILDE ENTERTAINMENT (about Clotilde van Derp, expressionist dancing and the path from expressionism to fascism)

You’re active on the Cologne new music scene as a cellist and ensemble director as well as composer: what is going on in Cologne at the moment? How does it compare to the rest of Germany?

I am in Cologne for three years now and the scene is growing more and more after it was a little quiet in Cologne in the 90’s and 2000’s.

I think Cologne has a really good potential for contemporary culture because the heritage from the 50’s to 70’s (with the electronic music, Stockhausen, Siegried Palm, the Kontarsky-brothers, Caskel, later Kagel etc) left a lot of infrastructure that we can fill with new content and formations. Cologne was destroyed completely after the war and that gives a lot of possibilities, because there is no cultural heritage that we could sell to the tourists without moving on, as Italy is still doing. Also the boom of art in the 80’s with all the galleries, Martin Kippenberger etc, shows the potential of this, on first sight very ugly, city.