We premiered Brian Ferneyhough’s latest work, Finis Terrae, with musikFabrik and Emilio Pomarico at the Festival d’Automne, Paris on 12th November. In advance of its broadcast on France Musique on 17th December, here are a few introductory thoughts about the piece:

Finis terrae – ‘The End of the Earth’ – has Ferneyhough now turned to eschatology? Is he finally releasing his apocalypse blockbuster?

No and yes; it may not outline a doomsday scenario in the Hollywood style (that might have been fun) but it does lay claim to a grandly post-human (or rather, human-less) vision of the world: its subject is moraines, the mounds and ridges of soil and rock debris, heaped up into ugly, barren landscapes by glacial movement. Here is the first part of Ferneyhough’s programme note:

‘After many years investigating the expressive potential of ‘damaged’ materials, in Finis Terrae I extend this guiding metaphor to consider the ravaged, rent and often grotesque moraine landscapes parsed by the vast forces typical of epochal glaciation. Although governed by an intractable geophysical ‘logic’, such formations cannot help but appear arbitrary and alien to the mind seeking to transcribe them into a dramatic framework based on human time-scales. As a result, we sense ourselves abandoned to a series of frozen catastrophic abruptions on an ill-lit terrain without obvious recourse to comforting fictions of organic perspective: we are strangers on the earth.’

An appropriate subject, we might add, for a world in the first stages of ecological disaster induced by man-made climate-change.

The piece is for eighteen players and six singers. Rather than being treated as soloists, the singers are trapped inside the ensemble, as Ferneyhough says ‘harried by its depredations and compressed into a claustrophobically narrow space only within which is a reductive form of survival possible.’ Musically this ‘reductive form of survival’ translates into an intermittent succession of short, tutti vocal passages (no individual moments of glory: this little group of humans has to stick together to survive) dispersed seemingly arbitrarily across the work’s time-frame, some stridently homorhythmic, others fractured and fragmented. There is a surprising amount of unison singing and speaking, too – another ‘reductive’ survival technique, an attempt both metaphorically and literally to assert their presence in this forbidding landscape.

(Indeed, Ferneyhough’s idea for the voices is that they be half-buried under the instrumental parts, never playing a concertante role but being immersed within the overall sound, sometimes but not always clearly audible. This ideal balance initially proved elusive; after some experiment the voices were significantly amplified and the singers placed, seated, at the front of the ensemble.) 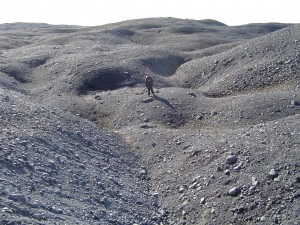 What of the instrumental ‘moraines’ themselves? (Loath as one is to make so simplistic an identification, it seems impossible to avoid – and this almost baroque-style emblematising is hardly alien to Ferneyhough’s aesthetic universe.) They are intensely dramatic, with a gestural clarity that typifies his recent music. Pauses over barlines (with instruments holding their notes through) are used repeatedly to great rhetorical effect (‘frozen catastrophic abruptions’). A notably recurrent material-type at the start consists of string glissandi with scraped, unpitched guitar and percussion – quite a surprising Ferneyhough sound that seems to point, Xenakis-like, to the sounds of the extra-musical, natural world; we are reminded of this at the end, where the percussionists scrape across the skin of drums, a sound that seems to signal the impending closure of the piece, as it succumbs to a sclerosis of rigid homorhythmic pulsing across the ensemble.

musikFabrik were wonderful, as always – and we greatly enjoyed working with Emilio Pomarico for the second time this year, who had mastered the piece in no time at all. We performed it again on 24th November in Cologne, and the third performance will be with Remix Ensemble, conducted by Peter Rundel, on 18th May 2013.