Francis Bacon, a painter of figures in rooms

Francis Bacon, a painter of figures in rooms

In advance of next Saturday’s premiere, Aaron Cassidy writes:

One of the great challenges of presenting and discussing my work over the last several years has been pulling the conversation back from technical, practical, logistical issues and regaining a focus on aesthetic, artistic, musical ones. I am aware, of course, that it is in many ways the notation – and the unusual performance techniques and approaches to instruments/voices that made the development of that notation necessary – that gives the works their identity, or at least, on the surface, gives them their uniqueness. But it’s also clear to me that this focus on the practical, factual aspects of the work is far too easy (it reminds me in many ways of the analyses of early 20th century repertoire that I had to do as an undergraduate in which we were identifying pitch sets or serial row transformations without ever actually engaging with sound in any real way, much less wider cultural or social contexts), and it risks turning the notation and the performance techniques into a kind of gimmick, a shtick, or, as I am increasingly discovering, a ‘brand’.

I’ve been concerned in the lead-up to next week’s premiere at how easy it is (in marketing materials, brochures, etc.) to make this piece sound like a bit of a Science Fair project. The descriptions often deal with the nuts and bolts, the exploratory tinkering, but it’s been quite difficult to steer that conversation back towards the things that were actually important to me in the construction of the piece. It mistakes the means for the end. In an effort to fight back, as it were, I thought I’d take the opportunity to talk here a bit about the title of the work, which I hope might help to put the piece into a larger expressive, artistic context. 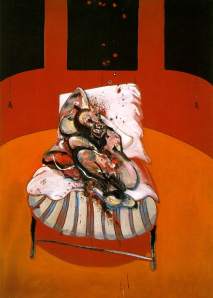 I have a longstanding interest (for a time, it was nearly an obsession) with the paintings of Francis Bacon. An earlier collection of works (solos for trumpet and trombone, an oboe/clarinet duo, and a work for small ensemble) was based on Bacon’s 1944 triptych Three Studies for Figures at the Base of a Crucifixion, alongside Gilles Deleuze’s fantastic text on Bacon, The Logic of Sensation (which provides the titles for the works, as well as all of the texts that comprise the accompanying programme notes).

In that case, what I was most interested in was the twisted musculature, the wiping, the smearing, the distortion and dislocation of bodies and limbs and faces. I’m fascinated by the fact that the images in the triptych are otherworldly, anthropomorphic, yet are still somehow immediately, identifiably, fundamentally human. Indeed, the separation and dislocation, in a sense, reveal that humanity. 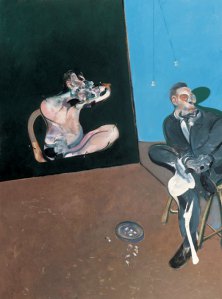 In the case of A painter of figures in rooms (a quotation from John Russell I found on an exhibit label next to Bacon’s Painting 1950 in the Leeds Art Gallery), I was focused on Bacon’s many portraits and in particular their treatment of mouths and faces. It’s difficult for me to describe my emotional reaction to these faces, but that is, I suppose, exactly what attracts me to them. There is a raw expressivity to these distorted, smeared images, somehow a direct connection between these horrifyingly mangled faces and a kind of unfiltered, unnameable human emotion. It seems, as well, that it’s almost always the mouth that is the most twisted and distended – it’s always clearly a mouth, and it’s often a mouth that is identifiably snarled or screaming or shrieking, but it’s in the wrong place, its proportions are wrong, it’s deformed and frightening. It is the most ‘outward’, immediate aspect of a body that is similarly dislocated, seemingly twisted in on itself in a tangle of limbs and organs. 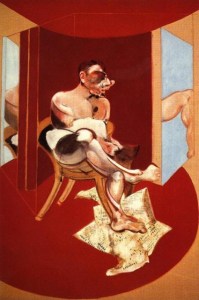 There is another important aspect to the paintings: there is, in each case, a sense of bounding, of containing, of constricting. Bacon’s ‘rooms’ play a crucial role, their simple geometric forms enclosing the figures in an unreal space, in a space whose geometries seem to maintain multiple perspectival layers which all seem to push against the figure in multiple directions. It’s a fascinating phenomenon – the background in these paintings is often exceedingly simple, but it isn’t flat, it isn’t static. Its simple circles and lines, its angles, its improbable mirrored reflections of the figure all push back against the space, not so much defining the space as scrambling it. There are many similar forces at work in this new piece. All of the various physiological states that have been discussed in the earlier blog posts – movements of the mouth, tongue, larynx, lungs, etc. – do not happen in an unconstructed, boundless space. Rather, at any given moment, the available space of those movements is in flux, the precompositional sketches prescribing for every physiological layer both a range of available movements and a space in which those movements can take place. What is important here (and, this for me is an essential connection to the Bacon images) is that the unusual recombinations of mouth shapes and tongue position and larynx tension and breath flow are a result of an underlying friction, a series of streams of resistance, pushing and pulling and wiping and smearing and obliterating. 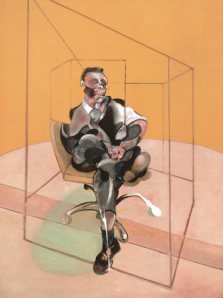 The fact that this happens with the mouth, and more importantly with the voice, is crucial. What results in the Bacon, and what I’ve set out to achieve in A painter of figures in rooms, is a kind of unfiltered expressivity. I’ve aimed to generate a direct and immediate form of vocalization that isn’t filtered through speech, through language, through the usual self-aware, reflexive ways that we tend to use our voices. What this requires, for me, is a dedicated avoidance of an approach to the voice that ‘sounds like …’. It doesn’t refer to anything outside of itself. It is the physiology of the voice laid bare, but, like the Bacon paintings, there is no way to dislocate the mouth, the voice, from the self.