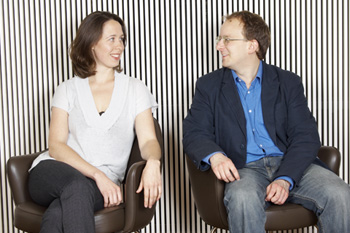 EXAUDI is one of the world’s leading vocal ensembles for new music. Founded by James Weeks (director) and Juliet Fraser (soprano) in 2002, EXAUDI is based in London and draws its singers from among the UK’s brightest vocal talents.

EXAUDI’s special affinity is for the radical edges of contemporary music, at home equally with maximal complexity, microtonality and experimental aesthetics. The newest new music is at the heart of its repertoire, and it has given national and world premières of many of today’s most celebrated composers, among them Sciarrino, Pesson, Finnissy, Frey, Posadas, Crane, Ferneyhough, Gervasoni, Mažulis and Fox. In recent years it has focused consistently on the music of its own generation, proudly championing the work of significant voices including (among many others) Aaron Cassidy, Evan Johnson, Bryn Harrison, Chiyoko Szlavnics, Naomi Pinnock, Amber Priestley, Matthew Shlomowitz, Joanna Bailie, Cassandra Miller, Andrew Hamilton, Leo Chadburn, James Weeks and Claudia Molitor.

EXAUDI is also strongly involved with the emerging generation of younger composers, and regularly takes part in composer development schemes and residencies such as Voix Nouvelles Royaumont and IRCAM Manifeste Academie, as well as workshops at universities and conservatoires throughout the UK. EXAUDI has particularly strong links with Durham University, Guildhall School of Music & Drama and City, University of London, where it is an Ensemble in Residence. In 2019 EXAUDI was proud to sign up to PRS Foundation’s Keychange initiative, committing it to gender-balanced programming across its own-promotion concerts and commissions.

An enduring feature of EXAUDI’s programming has been the mixing of contemporary music with the music of the medieval, Renaissance and baroque periods. In 2012 the EXAUDI Italian Madrigal Book project was launched to create new repertoire to stand alongside the masterpieces of Monteverdi, Gesualdo and others: the project has toured to Italy, France and Luxembourg as well as extensively within the UK. In September 2019 EXAUDI released its first exclusively early music CD, a disc of Gesualdo madrigals, on the Winter&Winter label, and in 2021 launched a series of commissions from female composers responding to his work, with a new work from Sylvia Lim.